To foster the quintessential southern charm Eufaula displays today, the town traveled a very colorful history. The tale begins as the story of America does - with the Indians - and a very peculiar name. Few see “Eufaula” and say “you-fall-uh,” as they should. One can imagine this was particularly true in 1823 when a group of Georgia men in search of fertile land for crops, descended upon a Creek Indian Tribe called “the Eufaulas.” The “Eufaulas,” one of three tribes of the Muscogee Nation living among the bluffs, had been inhabiting the area now known as St. Francis Point for nearly 100 years. Soon, however, they were sharing the land with the men from Georgia, who organized a settlement on the bluffs and adopted the Indian name, “Eufaula.” 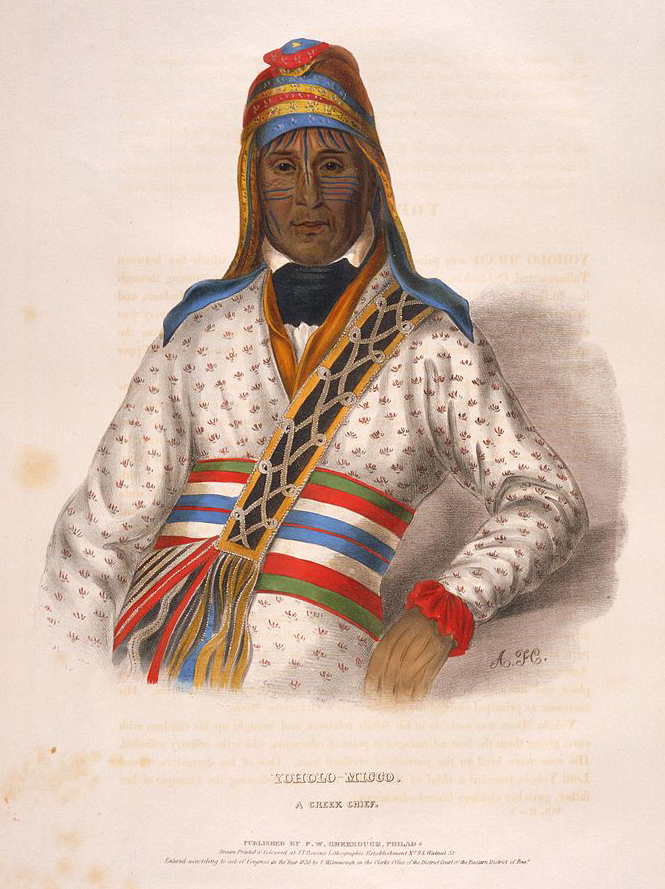 Chief Eufaula, also known as Yoholo-Micco, was the leader of the Eufaula People.

Around this same time, General William Irwinton, who served with an Alabama militia unit during the Creek War of 1836-37, was granted several thousand acres of land in neighboring Henry County. Through his political connections, Irwinton established the first steamboat wharf along the bluffs of Eufaula, as well as the first post office, which set the foundation for the town's rise to prominence as a center of trade. In appreciation, the town was renamed “Irwinton” in 1833.

The wharf, combined with the opening of the Federal Road, brought an influx of white settlers into the area. The swelling population of settlers slowly crept farther and farther into Indian land, ultimately leading to the bloody Creek Indian War. Irwinton's Indian inhabitants fled the settlement in 1832, ceding their land rights with the Treaty of Cusseta, and traveled along the Trail of Tears to their new home in Eufaula, Oklahoma.

In 1832 Barbour County was incorporated. Two years later Captain Seth Lore began developing a downtown area with three and four-story establishments along Broad Street. In his honor, the four main north-south avenues through downtown were named “Livingston,” “Orange,” “Randolph,” and “Eufaula,” which spells out L-O-R-E.

In the midst of a thriving economy in 1843, Eufaula suffered from a constant misdirection of mail to Irwinton, Georgia. The postal confusion was unsuitable for a center of trade such as Irwinton, Alabama, so it was decided that the town would reclaim its former name, Eufaula.

During this prosperous time, thousands of bails of cotton, alongside peanuts and numerous items of trade, were shipped down the Chattahoochee from Eufaula to ports as far away as New York and Liverpool. When the steamboats returned, they carried with them fine marble and exquisite furniture for the growing prosperity within Eufaula. Rather than building on plantations, Eufaula families chose to erect magnificent Greek Revival, Italianate, and Victorian homes on broad, tree-lined boulevards. Many of these homes can still be visited today due to a fortunate turn of events during the Civil War.

As the issue of slavery boiled temperaments in the early 1860s, Eufaulian John Gill Shorter was serving as governor of Alabama. The locals advocated secession, forming a politically powerful group of secessionists called the “Eufaula Regency.” Simultaneously, six companies of soldiers from throughout Barbour County marched as far away as Virginia to fight for the south.

Then, on April 29, 1865, a messenger on horseback galloped into town with the news that General Benjamin H. Grierson, backed by 4,000 Union soldiers, was marching towards Eufaula from Clayton. The approaching troops could only have one intention - to ransack Eufaula. In a twist of fate, river traffic simultaneously delivered the news that Johnston had surrendered to Sherman, and Lee had surrendered to Grant at Appomattox Courthouse.

Mayor Dr. C.J. Pope and other prominent citizens swiftly organized a welcoming party to intercept the General's march on College Hill under the veil of a white flag of truce. With the war over, the Union troops marched peacefully through town and across the bridge to Georgetown, Georgia. A popular legend is that several Eufaulians whistled and sang songs of Dixie as the troops paraded by. As a safety precaution, the mayor invited the General and his staff to dinner. Due to the fortunate timing and quick action by local officials, Eufaula's treasures were spared from the torches of the Union troops.

However, the history would not have been preserved for today without the formation of the Eufaula Heritage Association in 1965. After several homes were demolished to construct apartment buildings, the association formed and collectively purchased Shorter Mansion at auction, thereafter using the mansion as headquarters for both the Association and the annual Eufaula Pilgrimage. A museum honoring Alabama's eight governors who hailed from Barbour County, along with Admiral Thomas Moorer, a former Joint Chiefs of Staff, is located in the second story of the mansion. Today the Seth Lore/Irwinton Historic District remains the largest historic district in East Alabama and the second largest in the state. More than 700 structures are recognized on the National Register of Historic Places.

The 1960s also witnessed the formation of another influential aspect of Eufaula culture - the lake. In 1963 the Army Corps of Engineers created Walter F. George Lake, better known as Lake Eufaula, behind the lock and dam at Fort Gaines, Georgia. With a new attraction, combined with growing tourism and industry, Eufaula experienced steady growth.

Today the little town nestled on the bluff is recognized as a lure for the fisherman and the avid outdoorsman, and as a historical jewel with an unparalleled collection of antebellum homes and landmarks.

• I want to email This email address is being protected from spambots. You need JavaScript enabled to view it.
• I want to download a Visitors Guide!
• I’d like to get the Chamber Connections Newsletter!

Member of the Chamber of Commerce Association of Alabama